Feeling chatty? Join our Gitter chatroom if you have any question or want to chat about the software!

Caitlin’s path in her own words I began contributing to GRASS GIS last year during Google Summer of Code (GSoC) 2021. As a second-year doctoral student at North Carolina State University (NCSU) in the GeoForAll Lab, I was taking a lot of courses that used GRASS GIS and other OSGeo software. I’m interested in geo-visualization, open-source software development and making powerful geospatial tools accessible to everyone. So, applying to GSoC for the project entitled “Improved Integration of GRASS GIS and Jupyter Notebooks”, was a natural fit. The project aimed to make GRASS GIS more accessible and intuitive to use within Jupyter Notebooks. Not only are Jupyter Notebooks standard in the scientific community now, but they are also increasingly popular in the classroom and for online educational resources. Improving the integration of GRASS GIS and Jupyter helps increase the accessibility of GRASS GIS to scientists, teachers, and students alike. Although GRASS GIS has an extensive Python API, managing GRASS sessions within a Notebook and visualizing data, e.g. rendering maps in-line or interactively exploring a map by zooming in, was difficult.

During the GSoC project, my mentors (Vaclav Petras, Helena Mitasova and Stefan Blumentrath) and I developed a new Python subpackage for GRASS GIS called grass.jupyter that aimed to address some of these issues. By the end of GSoC last summer, we’d written an experimental version of grass.jupyter that contained a basic session initiation function and two visualization classes: Map (previously GrassRenderer) for creating simple in-line maps as PNG images and InteractiveMap for creating interactive maps with folium (a leaflet library for Python). During GSoC, my coding improved significantly, and I learned a lot about GRASS GIS and how to contribute to open-source projects through GitHub. 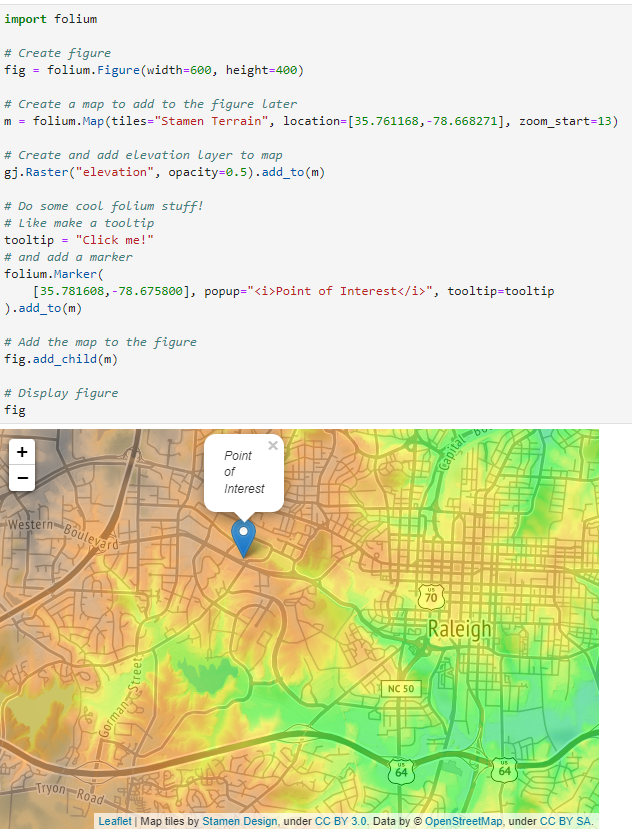 When the project ended, we realized there were still a lot of ways we could make the integration of GRASS GIS and Jupyter better, from small bug fixes in the existing classes to adding visualization classes for space-time datasets. That fall, Vaclav Petras wrote Map3D, a 3D sibling to Map for making simple in-line PNG renderings and further improved session handling.

Inspired by my GSoC experience and now with a list of things to improve, I applied for a GRASS Mini Grant with the goal of improving the GRASS-folium integration for interactive maps and adding visualization class(es) for space-time datasets (See project details here). One of the features that makes GRASS GIS unique among GIS software packages is its framework for managing, processing and visualizing temporal data. In the GUI, temporal data is visualized with the g.gui.animation tool. We wanted to create a similar interactive visualization tool that would be part of a notebook. I worked on the grant during the first few months of 2022 and by the end, we had a stable version of grass.jupyter that was officially released with GRASS GIS version 8.2. At the completion of the grant, we had 4 different visualization classes: Map, Map3D, TimeSeriesMap, and InteractiveMap along with a new folium API that allows users to add GRASS raster maps and data to an existing folium map instance.

You can find GRASS GIS tutorials using grass.jupyter on GRASS GIS’s GitHub repository. In the GRASS GIS GitHub README, there’s also a link to Binder where you can run the notebooks in the cloud – no installation needed. Further details and documentation about grass.jupyter library can be found in the manual page.